PHP isn’t typically thought of as a solution when creating worker or background processes, jobs that typically can last for an extended period. These can be tasks such as image processing, file repair, and mass email batch jobs.

Typically, PHP is linked with HTTP requests, requests which are short in duration and stateless in nature. However, just because of this enduring association, it doesn’t mean that PHP can’t be used for background processes. On the contrary.

If you’re considering developing background processes in PHP, then this post is for you. I’m going to step you through five points that you need to keep in mind. Hopefully, by the end, you’ll have less stress and effort as a result.

They can die for many reasons, including out of memory exceptions, connection errors, as well as a number of other conditions. Given that this could happen and to avoid manual intervention to restart the job, it’s helpful to make use of an angel process.

The angel process isn’t responsible for anything else. Consequently, the logic should be quite rudimentary, and its load should be quite light at any given time. However, there are a couple of conditions that you need to be aware of, when writing them.

No matter what language you write your jobs in, you have to know when they fail and be able to restart them when they do. PHP is no exception.

So, how do you do this? You could roll your own solution, such as a shell script, but there are many existing solutions already available. As a result, you should never need to write your own.

Here is a selection of them, delimited by operating system:

As background jobs can last for quite some time, it’s helpful to be able to inspect their state when required. There’s often nothing worse than knowing that a job is still active, yet to have no information about how much or how little progress its made, how long it takes to complete, and any problems that it has encountered during processing.

Given that, it’s handy, though arguably not essential, to have some form of monitoring available. This could be something quite rudimentary, such as printing out a list of the currently active jobs, their start time, expected completion time, and the number of failures that they have encountered to the terminal.

It could also go as far as a comprehensive dashboard, such as the monitoring in Tideways: 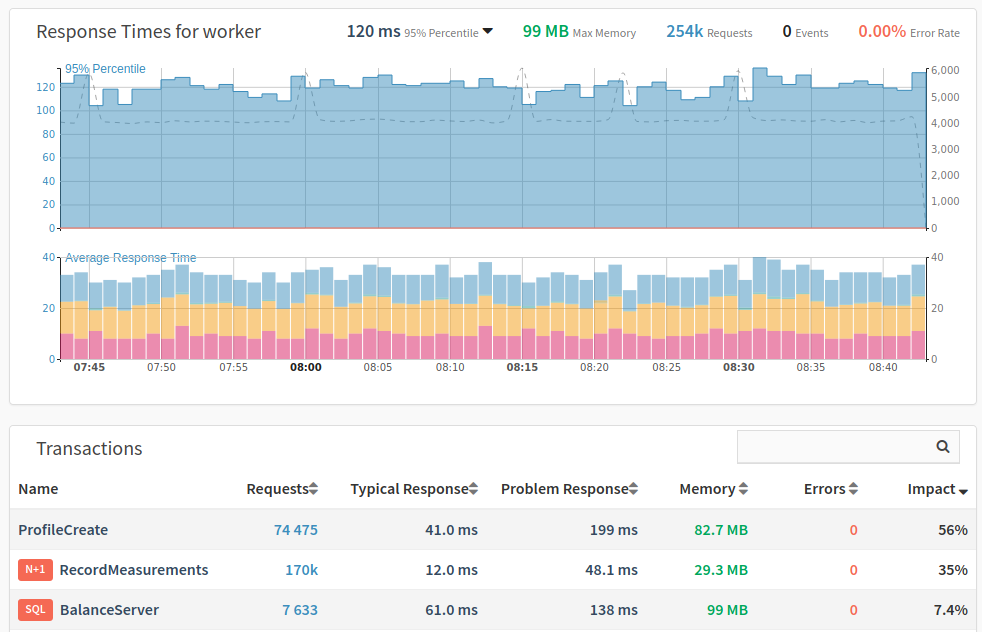 Whichever way you go, ensure that your job is storing some form of statistical information that can be periodically polled and collated.

Many vendors provide built-in functionality to store this information, such as Microsoft’s Azure platform. Alternatively, you can store your own in one of the open-source databases, such as PostgreSQL, MySQL, or SQLite.

PHP wasn’t designed with long-running processes and tasks in mind. It was designed for shorter tasks based around the nature of an HTTP request. As such, long-running tasks can be problematic, mostly because of memory consumption.

There are a couple of things that you can do to help reduce memory consumption. These include:

Long-running jobs will inevitably encounter some form of network collision or outages that temporarily prevent them from continuing to execute. These can be caused by too many users being active at one point in time, one or more servers or network devices between the client and the end server being down, or even something as drastic as a DDOS attack.

It’s important to note that the time between the restarts is a random interval, up to a maximum defined value. Because value is random, it helps avoid the possibility that another background process may choose the same interval and begin executing at the same time as the current client, resulting in the same outage occurring.

The net effect of implementing an Exponential Backoff algorithm is that processes:

That’s been a broad introduction to five challenges which PHP developers face when developing worker (background) processes. While not extensive, it’s provided an excellent introduction to them with the hope that these challenges can be avoided in the applications that you and your team are developing.