PHP & Shared Nothing Architecture: The Benefits and Downsides

There are several ways (architectures) in which applications can work, with the most notable being:

In this post, we’re going to look at what Shared-Nothing Architecture is, along with its benefits and downsides, concerning PHP and its impact on performance.

Several different languages can be used for web-based application development, most of which you are likely already familiar. The most popular of these are JavaScript, Ruby, Python, Java, Go, R, and, of course, PHP. Of these languages, however, only PHP uses a Shared-Nothing Architecture by default.

If these terms are new to you, let’s briefly step through them.

A Shared-Nothing Architecture is a distributed-computing architecture in which nodes do not share (independently access) memory or storage with any other. The intent is to eliminate contention among nodes.

A Shared-Disk Architecture is quite similar to shared-nothing, except that every node interacts with a shared disk, typically a database (such as MySQL, PostgreSQL, and Oracle), or a shared filesystem typically provided by a storage area network (SAN) or network-attached storage (NAS).

Similar to shared-disk, the Shared-Memory Architecture, as the name implies, is where each node makes use of a shared-memory resource. This could be a cache provided by Redis, Memcache or APCu.

As the name implies, this is where each node shares all resources with every other node. 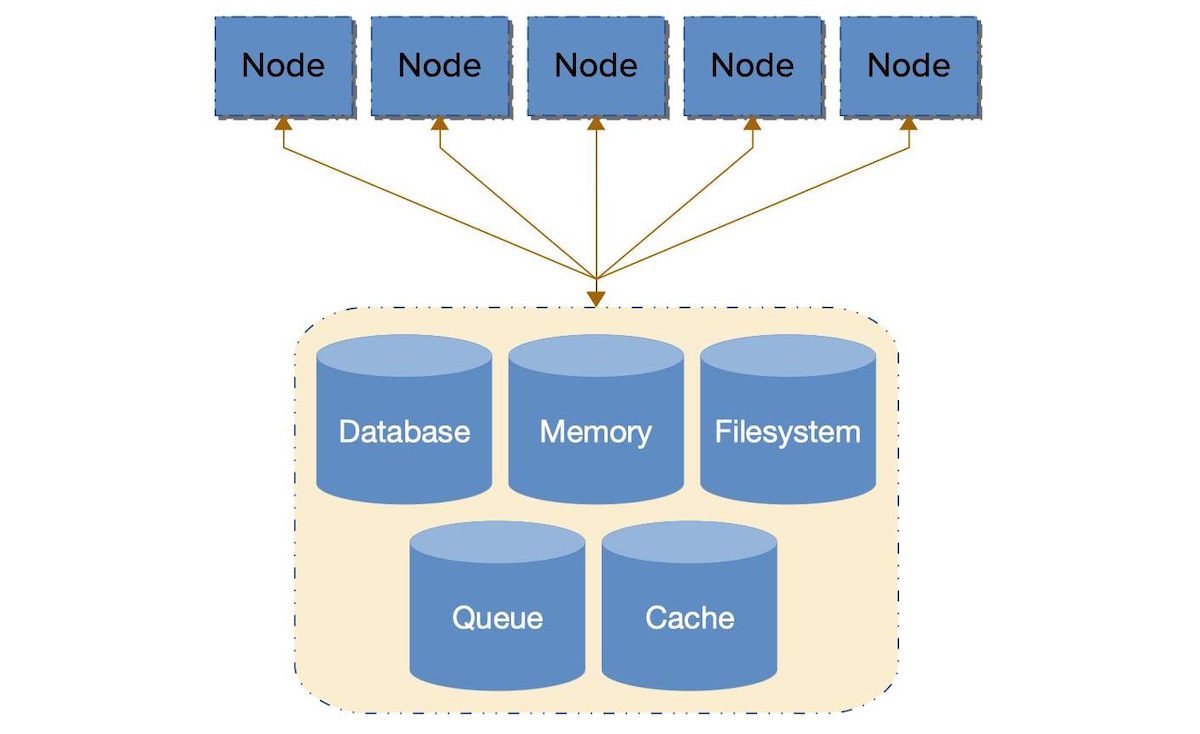 Shared Nothing = PHP By Default

If you’ve ever considered how PHP works, by default, then you’ll know that it is based around a shared-nothing model. This is because, for every request a node starts from scratch — with no memory shared from the prior request of the same node. It brings all the required objects into memory, performs the required processing, and then releases all the resources when the request has been fulfilled. This approach lies in stark contrast to languages such as Java, which persist objects across multiple requests.

However, why is this model a good one? Let’s consider the benefits. A Shared Nothing architecture has several key benefits; these are:

It Eliminates Single Points of Failure

Its Simpler to Scale

As each node can serve requests to the application without having to deal with resource contention, then as many additional nodes as are required can be added, as and when necessary, to scale the application to provide sufficient capacity.

As with the previous point, individual nodes can be upgraded, or replaced, without shutting down the entire application. No node is aware of any other, so it doesn’t matter if one is removed, upgraded, or improved.

PHP developers don’t, often, have to think about memory too much. In most PHP applications, memory is used within a single, often very short-lived, request. Objects are initialized, used, and dropped. Consequently, developers, generally, don’t have to deal with the implications of objects that persist for a long time; such as with worker processes, or across multiple requests.

Is it A Practical Model?

Like many questions, the answer is: “it depends”, and is based on many factors. The prime among them is: “How is your application is designed and/or developed?” That design (or legacy development) may necessitate not strictly adhering to a shared-nothing architecture, but rather a combination of one or more of the others.

If it helps, cast your mind back to the earlier versions of PHP. In those days, PHP was, virtually, wedded at the proverbial hip with MySQL. Countless articles and tutorials detailed PHP apps storing all their data in a MySQL database.

Then, over the years as applications became larger and more complex, a greater emphasis was given to sessions and caching as well. Sessions were often stored on a shared filesystem or in a database and application objects, and its data were often cached in a high-performance, in-memory data store, such as Redis or Memcached. And let’s not forget the use of queueing servers, such as RabbitMQ, Beanstalkd, ActiveMQ, and Redis.

As a result of these, and other, changes, it’s very easy for PHP applications to more likely be a blend of shared-memory, shared-disk, or shared-everything.

However, if care’s given, each node can still, more or less, operate in a shared-nothing manner.

Is Shared-Nothing The Right Approach?

Before you seek out alternatives, it’s worth asking if you the benefits of not using PHP with Shared Nothing are worth it

As we’ve seen so far, shared-nothing offers a significant number of benefits. Additionally, PHP’s shared nothing design provides a significant performance advantage, and larger frameworks are built around this approach.

That said, there are individual use-cases that work better with sharing memory across requests, such as Websockets. What’s more, if you build an application based around shared-nothing, it’s not a trivial endeavor to move away from it. You can’t just flip the proverbial switch at a time of your choosing. So, I’d strongly encourage to you carefully consider if not using it truly is what you want to do.

Running PHP Without Shared Nothing

If you’re keen to build applications in PHP which don’t fully implement a shared-nothing architecture, then you may be interested in knowing that there are some frameworks available to help out. These are:

In this article, we’ve taken a (brief) look at four of the most common application architectures, but given particular emphasis to one: shared-nothing. We’ve learned about its key benefits and their impact on application performance. We also got an overview of three of PHP’s most common shared-nothing frameworks, those being Roadrunner, Swoole, and ReactPHP.

I hope that this article’s helped give you a clearer picture of the architectural models available, and why PHP’s default is such a powerful one.